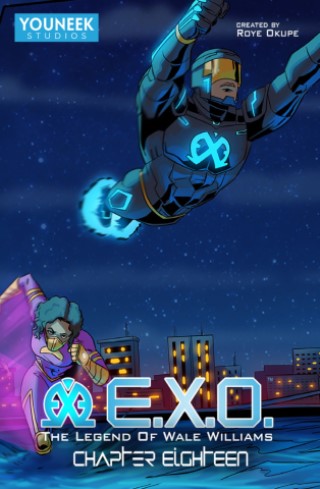 E.X.O. – The Legend of Wale Williams is a science fiction superhero story about redemption, set in a futuristic 2025 Africa. Vol 2 continues to chronicle the journey of Wale Williams a.k.a EXO, who was last seen hanging on for dear life after his first encounter with the incredibly powerful and sinister Oniku, leader of the extremist group, The CREED. After his shocking revelation, Oniku now has all he needs to launch a crippling attack at the heart of Lagoon City, an attack that would be felt across the nation of Nigeria. Can Wale finally become the hero he has always avoided but was always meant to be in time to stop the inevitable? And what role does the combat adept Fury play in all this? Only time will tell.